St Austell Printing Company are pleased to announce the release of a second edition of their popular “Cornish Pairs” card game.

Last year SAPC unveiled their promotional card game which is is an adaptation of the well-known game “pairs”; but instead of matching numbers, players have to match up 15 different Cornish landmarks.

The 2019 edition features a new set of Cornish landmarks, including Goonhilly Earth Station, Cornwall Airport Newquay, Trevose Head Lighthouse and the iconic colourful beach huts on Bude’s Summerleaze Beach. The new packs can also be combined with the first edition, doubling up the number of landmarks and making for a more challenging game.

Matt Bunt, SAPC’s Marketing and Communications Manager said: “We were blown away by the reaction to last year’s game and after being asked by lots of people, we decided to create the second edition.

“With this game, not only have we produced something that people can have fun with, we’ve been able to help promote a whole range of Cornish landmarks. We’re proud of being based in Cornwall and keeping every aspect of our printing and finishing processes in-house.”

If you’re going to see SAPC at the upcoming Devon Business Show, Business Showcase South West or attending our Print Power event, then you’ll be amongst the first to get your hands on the second edition of St Austell Printing Company’s very own Cornish card game.

Matt added that the appeal of the game has been far reaching: “We’ve had people sending us photos of the game being played across the world, including packs which ended up all the way in Australia and Dubai.

“For those who are looking to challenge themselves further, the second edition has been designed so it can be combined with the first – effectively doubling the number of landmarks to match.”

SAPC were awarded the worldwide contract to produce the card game Top Trumps in 2017. We invested £500,000 in a brand new machine and “Cornish Pairs” packs are being finished on the same equipment.

“Cornish Pairs” packs are not for sale and only available as a promotional item at upcoming events.

SAPC were helped in the Winning Moves “Top Trumps” contract bid with funding from BIG2, with part of the new equipment funded to allow the company to enter a new market sector. 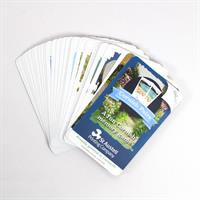