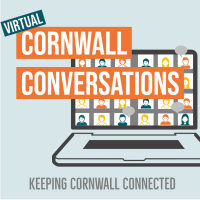 After 2020 we all know how unpredictable our world can be and we have all realised how important our communities and environment are. With this being said we are so pleased to announced the date of our first Cornall Conversations of the year 2021!

Cornwall Conversations is designed to keep you and your business updated with the latest hot topics in Cornwall. This month our topic is Build Back Greener

We have some great speakers planned, so make sure to keep checking back for more updates

FootAnstey
Chris Pritchett- Head of Energy and Mobility team
Chris will explore the importance of building futureproofed, sustainable transport infrastructure and how Foot Anstey has helped local authorities and businesses across the UK prepare for the rise in demand for EV charging and Mobility as a Service (MaaS) providers
Cornish Lithium
Lucy Crane- Senior Geologist at Cornish Lithium
Lucy Crane is currently a Senior Geologist at Cornish Lithium and heavily involved the Company’s Business Development and expansion. Lucy is a strong advocate for the standardisation of sustainable and responsible practices in mining, promoting these actions to the wider public, and is passionate about making the industry a more diverse place to work. She has been on the committee for Young Mining Professionals London since its inception, and also sits on the Executive committee for Women in Mining UK. She did a 2019 TEDx talk on ‘Mining our way to a low carbon future’ which has been well received. She holds a degree in Earth Sciences from Oxford University, and a Masters in Mining Geology from the Camborne School of Mines.
Lucy will be discussing ‘Lithium and the Energy Transition’ – the role that minerals are playing as we move to a decarbonised economy, and the potential to extract lithium in Cornwall with a focus on Cornish Lithium’s exploration so far.

Eden Geothermal
Tony Bennett – Operations Director, Eden Geothermal Ltd.
Tony is a mining engineer, with a wide knowledge of the geology and mining in Cornwall. Between 1980 and 1991 Tony worked as Drilling Support Engineer during the drilling of the three 2,000 – 2,500 m deep wells in the Carnmenellis Granite at the Camborne School of Mines Hot Dry Rock Geothermal Project. After this he became Technical Engineer involved with various aspects of creating, developing, testing and remediating the demonstration EGS reservoirs; latterly assisted with the feasibility assessment for a 6km deep system. Subsequently he worked for a mining consultancy based in Cornwall until joining EGS Energy in 2010 as Operations Manager, becoming an Executive Director in 2013. Since 2017, Tony has also worked on the United Downs Deep Geothermal Project.

This meeting will be via Teams. Please register through the Chamber website to be sent a link the day of the event